Why is April 1, 2020 so important? Every residence in the U.S. should have received a letter from the U.S. Census asking them to complete information about where they live on that day. The Census is constitutionally mandated to count every individual in the U.S. every 10 years.

What’s the big deal? Every response makes a difference. Federal funding and state/local distributions for public safety, roads, education, human services, housing, emergency assistance, and more are based on individual responses. The number of individuals in a state determine that state’s number of seats in the House of Representatives. The state legislatures will use this information to redistribute state/local election precincts and representation in their General Assemblies.

How hard is it to respond? It is easy and uncomplicated. There are only two of us at home and it was quicker than submitting my timesheet. I just needed to enter our names, relationship, birthdays, and race/ethnicity. My son’s roommate used the code in the letter sent to their apartment without including my son’s information. It was nothing to worry about. My son just had to indicate that he didn’t have the code, enter his home address, and complete his own information. If two people in the household complete duplicative or conflicting information, the U.S. Census will take care of that later.

Does everyone really count? Yes! (Almost) everyone who stayed at your house on April 1, 2020 counts. The questionnaire asks if the person you reported usually lives elsewhere. The U.S. Census will figure out how not to double count people usually residing in group homes, or those who attend college and live on campus. You can let them worry about that. My neighbor, who is an immigrant, wanted to know if this is something just for U.S. citizens. (No, it is for everyone, even out-of-town guests). There is no question on the Census about legal residency and there are penalties if someone else uses personal information provided in the Census.

What about scams? Individuals can find more information, including information in multiple languages, at the U.S. Census website (https://2020census.gov/). They should only respond to the Census questions at the following site: https://my2020census.gov/. Whether contacted via mail, email, phone, or at your door, no one will ask for your social security number, bank or credit card information, political information, or U.S. citizen status. If you suspect a scam, call 844-330-2020. You might not fall for the scam, but calling may prevent others from becoming victims.

Is there anything for data geeks? Research analysts at New Editions routinely rely on information tied to Census. There is also information on who is and isn’t responding to the Census. The U.S. Census Response Rates page contains searchable real time response rates for those who are curious. As of April 1st, Falls Church rocks with a response rate of 48.9%. Arlington (43.8%) has a slightly better response rate than the state of Virginia (40.3%).

Okay I’m convinced! What can I do to spread the word? At New Editions, many of us take for granted how tuned in we are to the current news and information. As I’ve traveled to community fairs and asked business owners to post notices, I’ve been surprised at how many don’t know about how the Census works and how easy it is to respond. Ask friends and family if they have responded. Post on social media that you have The Spread the Word page has ideas and graphics to use in social media. 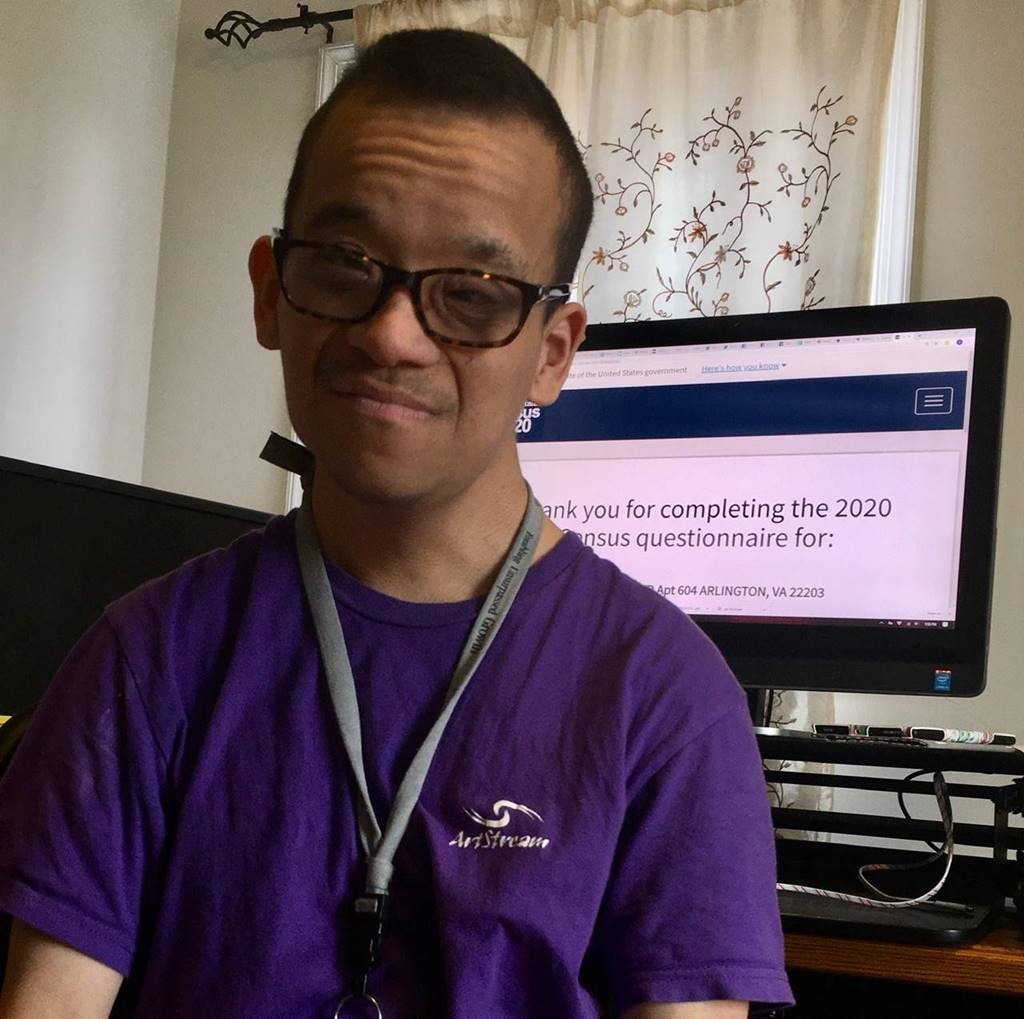 Caption: Cherie’s son, Pete is proud to be counted!